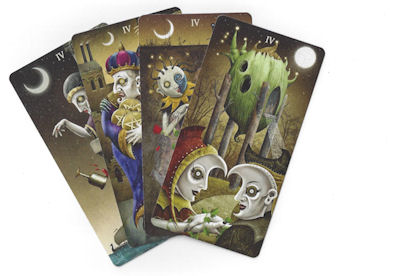 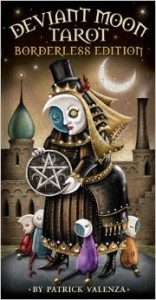 The tarot four cards, as in a cube, represents four equal sides. As in a square, the sides are all the same and makes the shape more stable. When you find fours in a reading, there will be more stability in the situation. For this week’s lesson, I’ve chosen to use the Deviant Moon Tarot. You may feel at first sight that it is a rather dark deck. When I received this as a gift, I felt much the same way but after using it for some time, I decided I really like the imagery and it’s not all that dark.

In numerology, the positive qualities of the four are disciplined, strong, stable, pragmatic, down to earth, reliable, dependable, frugal and trustworthy. The negative characteristics are having a boring side, may not bother to put much into appearance, and social awkwardness make them seem vulgar, crude or jealous.

Other things linked to the number four are the four elements, earth, water, air and fire. The four seasons also come to mind, spring, summer, autumn and winter. Also can be connected to directions, north, south, east and west.

Keep in mind that tarot four cards in reverse can be four walls which seem to close in or create our own prison. 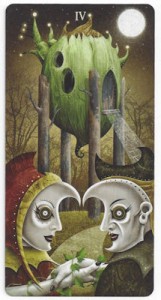 Looking at the imagery of this card we can see a married couple walking up a path to their new home. Four massive wands make a strong foundation to build their lives together.

Triumphant completion of a project, prosperity and celebration. In a relationship reading, this card can signify romance that may well end in marriage.

The four of wands represents the Lord of Perfected Work, the element of Fire, the season of Spring, the direction of South and the herb is Fennel. Fennel is used to eliminate gas, bloating and helps with constipation. It is also used in many Mediterranean dishes. 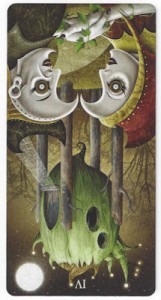 This card in reverse is not as bad as some others. Obstacles and completion delayed, but imminent. A period of rest and peace. A hiatus period before the successful conclusion of a matter. So it can mean a quiet time to collect your thoughts before great activity. Learn to appreciate what you have, the little things in life. 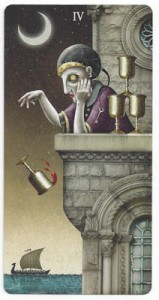 In the picture on this card we can see a lonely maiden on a balcony under a deviant moon. She looks to be dissatisfied with life’s gifts and is tossing a golden cup into the sea.

Unhappiness with our life, boredom and dissatisfaction. A time to re-evaluate where we are in our life and a need to seek new goals or more stimulating lifestyle. This may be the time to take a good look at why we are stuck in a rut, or why we aren’t reaching our potential.

The four of cups represents the Lord of Blended Pleasure, the element is Earth, the season is Summer, the direction is West and the herb is Burdock. Burdock is more commonly known as burdock thistle and is used as a diuretic and blood purifying agent. 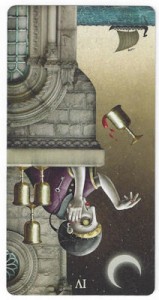 Seeking novelty and excitement just for the sake of wanting to relieve boredom but getting little pleasure from it.
New hopes and dreams, new relationships now possible. A desire for new goals and new ambitions but action will need to be taken. In other words, these things are possible but you have to not just want them but take action to make them happen. 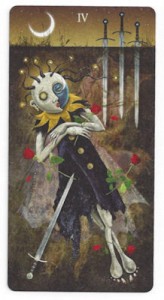 This card’s picture shows us a young girl lying on the ground dreaming and her visions are illuminating the tomb and keeping the four roses in bloom. Three swords are plunged into the earth to make her place of sleep while the fourth lies buried beside her.

The four of swords tells us it’s time to rest, relax and re-energize ourselves. We may need to take some time to ourselves to just retreat into solitude. Can also signify relief from sorrow or anxiety. There will soon be a change back to the active life. It might be a good time to hit the spa for a massage or just take some time to pamper yourself.

The four of cups represents the Lord of Rest and Strife, the element of Air, the season of Autumn, the direction of East and the herb is Mullein. Mullein is used for cough, bronchitis, earaches, colds, chills, flu and also used as a diuretic to increase urine output. It can also be used topically for burns, bruises, wounds and to soften and protect the skin. 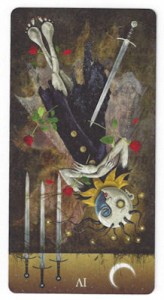 Renewed vigor, a return to daily life, events and activity. It is a caution to use discretion in one’s dealings.
If the client has recently been arrested, could indicate jail time will most likely result from their actions. 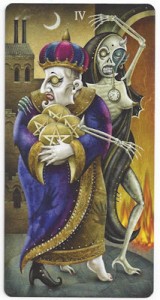 The picture on this tarot four card really captures the meaning behind it. The miser is being escorted by the demon into the fire of damnation all the while clutching the four pentacles in an attempt to maintain his worldly possessions.

A miser who is selfish, greed and tight with money or possessions. Putting material gain over all else. Increase power through wealth and influence rather than hard work. Someone who puts more value on their material possessions, often over their own family or friends. Can also mean loss of possessions or their home.

The four of pentacles represents the Lord of Earthly Power, the element is earth, the season is Winter, the direction is North and the herb is Cascara Bark. Cascara Bark is used as a laxative and often used as a dietary supplement. 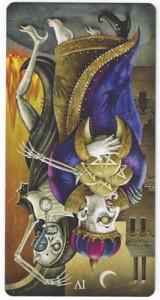 Material delays, hardships in business affairs. May be time to re-evaluate what is important, learning about charity and giving to others.
A new interest in spiritual areas of your life that may be lacking.

Again, if you have your own deck of cards, I would like you to pull a different card each day and without looking up the meaning in a book, write down what you feel when you see the card and if anything you get from studying the picture. I would love for you to let me know through the comment section below or by email, your interpretation of the card you’ve drawn.

.
Just a reminder, there is a print friendly version of each lesson available by using the print icon at the bottom of the article. You’ll find it in the share icons listed below.

I am a visual person and learn better if I can see it rather than just read it, so I am currently making videos of each lesson. They are available here on my site at the Video page, or you can view them on my YouTube channel.

Remember to subscribe to my blog for email notifications to remind you to check back on Mondays for a new lesson. You can also like my page on Facebook and follow me on Twitter where I will be posting as each new lesson is available. If you have any questions about this or previous lessons, please either post a comment here or on my Facebook page. You can also send me an email if you choose not to have it posted.

The deck for this week’s tarot four card lesson, The Deviant Moon Tarot, by Patrick Valenza is available through their website or through the publisher, U.S. Games, Inc. To find it on Amazon, click on the picture of the deck.