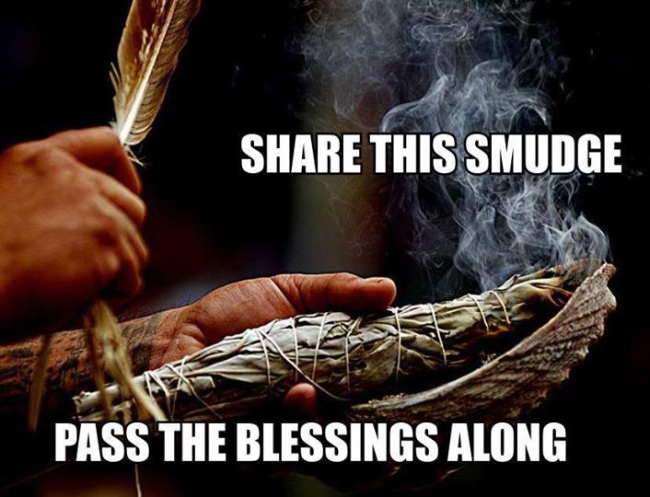 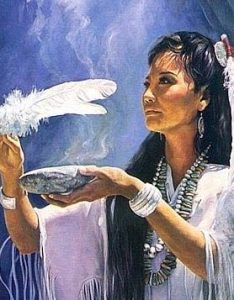 Smudging, is it a New Age Fad or an Ancient Tradition? I guess it really depends on who you ask. There are people who heard it was used to sell a house say they thought it was just a lot of New Age baloney. Yet there are many who feel it really works. However, if you ask most people why they think it works, they really have no idea of the concept, just that they saw people on the internet or television program saying it worked for them. The truth, while it might be a New Age Fad for some, it truly is an ancient tradition used by many cultures.

Smudging has been used for many centuries by the people of Tibet, China, India, Europe and the Western World. Early on in some European countries, they would run their animals through smoke to rid them of pest, but also believed it would protect them from harm. It has long been a ceremonial tradition of Native Americans used for cleansings, blessings and protection.

Smudging can be done for many reasons, and there are a variety of herbs used for different reasons. The most common herbs used for Native Americans are white sage, red cedar and sweetgrass. This ritual is usually done to remove negative energy and bad spirits, also as a spiritual cleansing for both your home and body. There is also the belief that the rising smoke ascends to heaven carrying a spiritual message.

Smudging: Herbs and their uses

Smudging: What you need to use

You can do your own smudging and you don’t need anything too expensive or elaborate. You can either buy your smudge stick or herbs or if you have access to the herbs, make your own. If you are buying the herbs, I hope you will be sure to use a reliable source. For instance, there is a big difference in using the sage you use for cooking and the white sage that is used in smudging. If you are new to smudging, I would also recommend you use a smudge stick rather than just the dried herbs. What you might need to know is that you need to make sure it is emitting a lot of smoke, and often the dried herbs may blow around when lit.
You should use a clay, stone or glass container, such as a small bowl. A lot of places on the internet will tell you to use an abalone shell, but I’ve read the Native Americans teachings say the shell is from the ocean and should only be used in water ceremonies, never for burning. I fill my glass bowl with dirt, first to hold the smudge stick as it burns keeping the burning ashes from flying out, but also to extinguish the stick when I’m done.

Now that you have what you need to start smudging, there is something else I suggest you do before you begin this or any type of ritual or ceremony. You should ground yourself and also ask for protection, this is something I feel should always be done. For grounding, I stand with my eyes closed and imagine myself rooted to the ground, like a tree whose roots are going deep into the ground or floor. For protection, again I close my eyes, imagine myself surrounded by a safe white light and saying a prayer. The prayer can be to whatever higher entity you choose for your own belief. In the prayer, always say you mean no harm and ask no harm come to you.

Gather your smudging materials, carefully light the smudge stick or loose herbs. Once it is fully lit, blow out the flame so you are working with only the smoke. You should have a nice full plume of smoke to begin. I generally first smudge myself by using a smudging feather, but usually just my hands to surround my body, starting with my head and working down to my feet. As I’m doing this, I will say prayers asking for any negative energy to be removed and to bring me protection. If you aren’t sure what to say, just recite something like the Lord’s Prayer and add your own words for removing the negative and bringing you protection. There is no wrong thing to say, just whatever you feel will keep you safe and protected.

To begin the cleansing of your home, I always start with the farthest left corner from the door where you enter your home. Using your hand or feather, make clockwise circular motions to distribute the smoke and continue until you have covered the entire area of the room. If it’s a bedroom, don’t forget to do the closets. Continue doing this until you have completed all the rooms in your home. Don’t forget to continue reciting your prayers asking for removal of anything negative and bringing you positive protection. If you have an attached garage, you should also smudge that area as well. Once you are finished, you can extinguish the smudge stick or herbs. One final thing I always do when I’m finished smudging is to give a prayer of thanks for helping and protecting me while I did the cleansing.

Something I often do when I’m done if I’ve just used white sage is to now burn a calming herb or candle, such as lavender, vanilla or cinnamon. Since a lot of people don’t really like the smell of the white sage, this is also a good idea to make the house smell nicer. If I don’t have one of these candles on hand, I will sometimes just drop a few lavender buds or cinnamon sticks into some boiling water to get the same results.

I always recommend smudging a new home before you move in, especially if someone else has lived there before you, just to remove any negative energy left behind. In older homes, especially after major renovations, it might take more than one smudging to cleanse the house. When you are smudging, if you see the smoke get very heavy and dark, I would suggest you redo that area again.

If you have any questions or need further information, please contact me, I’ll be glad to help with the information.

I am available for Live Chat session or you can email me to schedule a session.

In most cases I’ll get right back to you and it will never take more than 24 hours. When making an appointment, please check the clock on the right side for time zone, I am in Pacific Time in the United States.

Be sure to check out my other articles here on my blog, and for more articles like this, I also write for Psychic Scoop.