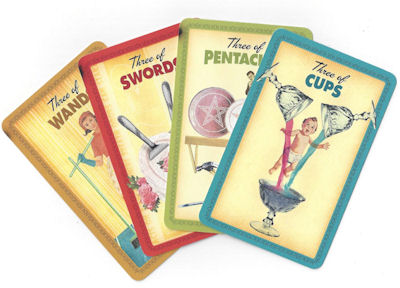 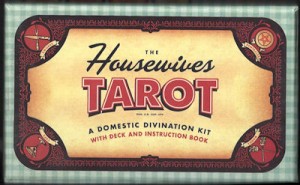 This week’s tarot lesson is the tarot three card in the minor arcana. I think you’ll really like the deck I’ve chosen for this lesson, The Housewives Tarot. This is a really good deck to use if you are just starting out and still a little frightened by the pictures of some of the more traditional tarot decks. It’s also a good deck to use if you are reading for a client that might be a little skeptical or put off by the imagery of other decks.

I apologize for this lesson coming late and week five lesson will also be posted later this week.

The tarot three cards are relative to the number 3 in numerology, so I thought I would add this for you. The positive characteristics of the number 3 are imaginative, expressive, communicators and artists. The negative characteristics of the number 3 are vain, extravagant and prone to complaining. Three is the birthing of true wisdom. Three is the number of the trinity, in life, religion and even cooking. In life, it is man, woman and child, but can represent any family made up of two parents and a child. Many religions believe the trinity consists of the father, son and Holy Spirit. My family combines garlic, onions and bell peppers for our trinity when cooking. 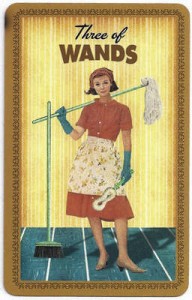 The three of wands represents the Lord of Established Strength, the element of Fire, Spring is the season, South is the direction and the herb is Saffron. Saffron is used to stimulate and promote pelvic circulation, male – prostate, woman – ovaries. It is also used as a spice in cooking.

The three of wands will usually depict a woman as it refers to the reproductive organs, two ovaries and a uterus.

Looking at the picture on the card, we see a housewife getting ready to clean up, taking stock on what chore to tackle. It’s a card representing satisfaction, progress and consideration. Opportunities, successful trade or commerce, business ventures, good associates or partners. Being in the right place at the right time. Practical help may come from a successful person.

If you want to become successful, you have to put in the work and the time. 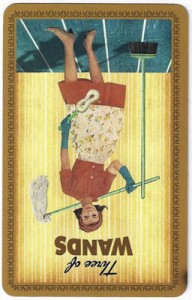 Just as the upright three of wands represents success, the reverse shows disappointment in a venture due to lack of pride, arrogance or because of refusal to take advice. Mistakes made through carelessness or scattered energy. 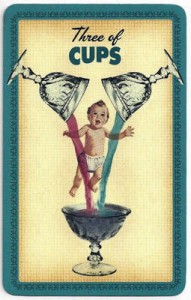 The three of cups is always a good card to come either as a single card reading or a spread outcome. It’s the Lord of Abundance, the element of Water, the season of Summer, directional West and the herb is Trillium. Trillium is useful in controlling diarrhea and bleeding, especially during menses.

This is a card of creation and if you look at the picture depicted on the card, you see two glasses being poured together to create a beautiful baby. While in the picture we are seeing it as a new birth, it doesn’t have to signify the client giving birth, may be a family member, but it doesn’t always mean a physical birth. It can be referring to a new business or project.
Happiness, sharing, love and abundance are also shown in this card. 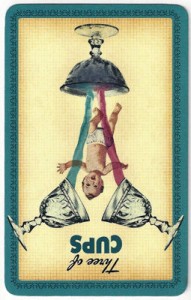 Excessive self-indulgence, selfishness, exploitation of others. Can be a sign of someone that is self-destructive causing them to over eat, drinking and may be an indication of drug use. 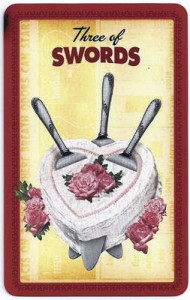 The three of swords is not a card I like coming up pulling a card for myself for many reasons. It is representative of the Lord of Sorrow, the element of Air, Autumn is the season, the direction is East, and the herb is Pleurisy Root. Pleurisy Root, a variety of milkweed, is used as an expectorant. Used for symptoms of pneumonia, whooping cough, pain or inflammation caused by pleurisy.

This card is showing us a pretty heart shaped cake that has been pierced with 3 swords. It’s telling us this relationship is falling apart and usually is a sign of infidelity by partner causing heart break to the other. A lot of constant quarreling and heartache. The picture is saying the cheating partner wants the cake and to eat it too, in other words, wants to cheat but keep you.

It can show a separation either in a romantic relationship or a business that is inactive but not legally dissolved. 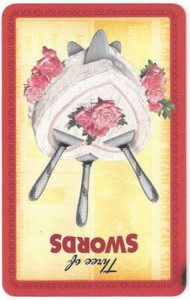 While most cards have a good upright meaning, the three of swords is not one of those cards and the reverse is not a good card to get either. It just adds to the misery with discord, confusion, loss or sorrow. 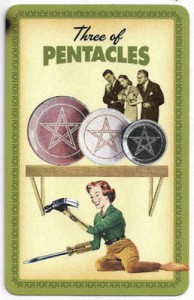 The three of pentacles is the Lord of Material Works, it is an Earth element, the season of Winter, the direction is North and the herb is Gentian. Gentian is used to treat digestive problems, fever, hypertension, muscle spasms, sinusitis, malaria and thought to help with many other health issues.

Let’s take a look at the imagery on the card. The neighbors are in awe of the three beautiful plates on the shelf. This means you are getting praise or recognition for a job you’ve completed or a job well done.

Success through effort and hard work, increase of material things and gain in commerce. This card often comes up to depict an artist or craftsman. 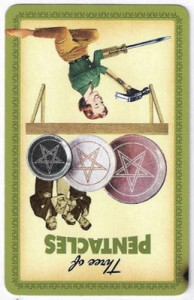 While the three of pentacle upright is a job well done, the reverse shows us opportunities passed up due to fear of loss. Preoccupation with gain can lead to hoarding and miserliness. Fear can be hard to overcome and causing you to be afraid to follow your dreams.

Again, if you have your own deck of cards, I would like you to pull a different card each day and without looking up the meaning in a book, write down what you feel when you see the card and if anything you get from studying the picture. I would love for you to let me know through the comment section below or by email, your interpretation of the card you’ve drawn.

Just a reminder, there is a print friendly version of each lesson available by using the print icon at the bottom of the article. You’ll find it in the share icons listed below.

I am a visual person and learn better if I can see it rather than just read it, so I am currently making videos of each lesson. They are available here on my site at the Video page, or you can view them on my YouTube channel.

Remember to subscribe to my blog for email notifications to remind you to check back on Mondays for a new lesson. You can also like my page on Facebook and follow me on Twitter where I will be posting as each new lesson is available. If you have any questions about this or previous lessons, please either post a comment here or on my Facebook page. You can also send me an email if you choose not to have it posted.

The Housewives Tarot, by Paul Kepple and Jude Buffum can be found on their website or by clicking on the picture at the left to find it on Amazon.