Tarot Lessons, Getting Started, Learning About The Tarot Deck 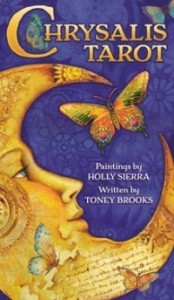 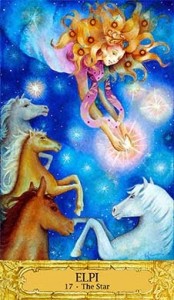 Learning about the tarot deck will be the subject of this week’s lesson. Most traditional decks contain 78 cards, including both the Minor and Major Arcana. For this week, I will be using the beautiful Chrysalis Tarot. During the course of the lessons, I will be using several different decks to give you an idea of the types of decks available. The cards I’m using for these lessons are all in my personal collection of tarot decks, ones I have used or am currently using.

My first tarot deck I started reading with, and one I still use today is a deck most of you have probably seen over the years, The Rider Waite Tarot Deck. I have, over the years, also started using many other decks but whatever tarot deck you decide to use, the meanings of the cards never change.

The tarot deck should not be confused with Angel or Oracle Cards. They are different and we will not be covering those decks in these lessons.

There are 56 cards in the Minor Arcana. It consists of four suits, much like a regular deck of playing cards. Depending on which tarot deck you choose, the suits are sometimes called different things but in most tarot decks, they will be wands, cups, swords and pentacles. In the Chrysalis Tarot Deck, for example, they are using spirals as wands, scrolls as swords, stones as pentacles, and mirrors as cups.
The suits each contain the same cards as a regular deck of playing cards, Ace through 10. In the court cards, the King and Queen are the same, however, the Jack would be a Knight and the tarot deck adds an extra card to the court, the Page. 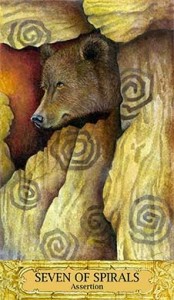 Generally in a tarot reading, the suit of wands represents: 1. The Career portion of our everyday lives. 2. The Element of Fire. 3. The Three Fire Signs of the Zodiac, Leo, Aries and Sagittarius.

Wands are also most often associated with great energy, hectic times, and things moving at a fast pace.

If it’s a court card, it might also be depicting a person with red or blond hair, fair skinned, blue or hazel eyes. They will most often be full of energy

While I’ve heard different timing for the wands, I’ve always felt they were associated with Spring. We’ll get into this more as we learn the meanings of the individual cards.

In reference to their match up to a regular deck of playing cards, the Old World description and the one I use, would be the suit of clubs. However, the Rider-Waite follows the idea wands are used as diamonds in a regular card deck. 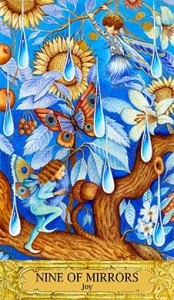 The suit of cups will usually represent: 1. The Emotional part of our lives. 2. The Element of Water. 3. The Three Water Signs of the Zodiac, Pisces, Cancer and Scorpio.

While the suit of cups are often part of a love relationship reading, keep in mind that a relationship doesn’t always mean two people in love. These cards can come up regarding family, children or even friends. They revolve around emotions of the heart, so they can come up in different aspects of a reading.

The court cards for cups will usually refer to a person with blond to very light brown hair, with blue or hazel eyes. Their personality traits are usually very warm, friendly, giving and having a positive attitude.

In regard to time of the year, I feel they are most connected with Summer.

In a regular deck of cards, they will correspond to the suit of hearts in both Old World and Rider-Waite. 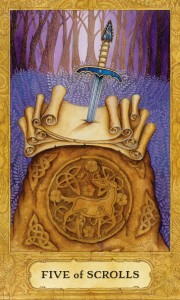 The suit of swords is representative of: 1. The Mental portion of our reading. 2. The Element of Air. 3. The Three Air Signs of the Zodiac, Gemini, Libra and Aquarius.

The Mental portion of our daily lives seems to encompass a large area, from hopes and dreams to fears, stress and pretty much anything foreboding. While in many instances of a reading, swords may not be what you want to see come up, but bear in mind, the cards surrounding them in the lay-out can sometimes make the difference in good or bad news.

The sword court cards will most often refer to someone with medium to a little darker brown hair, brown or grey eyes. The traits for this suit is will most often be someone who is determined in their thoughts, very diplomatic but generally set in their ways.

Swords will most reflect Autumn in the seasons of the year.

In the Old World, they will be the suit of spades in a regular playing card deck, but clubs in the Rider-Waite. 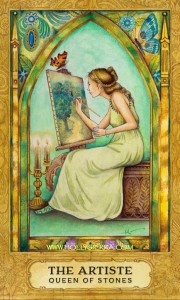 While most people refer to the pentacle as sign of evil, black magic and witchcraft, in the tarot deck it represents: 1. Money or Material questions. 2. The Element of Earth. 3. The Three Earth Signs of the Zodiac, Taurus, Capricorn and Virgo.

When pentacles appear in a reading, it will usually be a good outcome for the client. As we go further into the tarot deck, you’ll be able to see the exact reasoning for this statement. However, as with all cards, the place they fall in the lay-out and the cards surrounding them will tell the real story.

The person that is usually associated with the suit of pentacles will have dark brown or black hair, and very dark eyes. As for their personality traits, they will likely be someone that handles money well, be strong willed and extremely loyal. Once again, we will get into this more as we learn the meanings of the court cards of each suit.

The suit of pentacles are usually consider to be the Winter season.

Pentacles in reference to the regular playing cards are the suit of diamonds in the Old World depiction and the suit of spades in Rider-Waite followers. 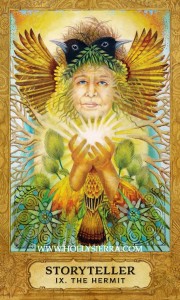 The major arcana consists of 22 cards and while they are found in tarot decks, there is nothing to correlate with a regular deck of playing cards.

The major arcana, unlike the minor arcana is actually 22 separate and individual cards. Each card has its own meaning which consists of the picture or symbolism, the name and also the number. Some readers will only use the major arcana in readings because they feel it will give them a complete reading. 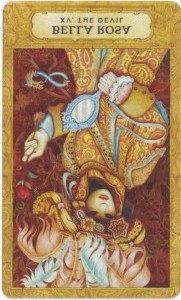 The tarot deck has meaning for both the upright and the reversal of the cards. Many readers use both, and while I did in the beginning of working with the tarot, I have not used the reversal card method for many years. I’ve found that I can still get an accurate reading with all of the cards in the upright position. That’s not to say that on occasion while shuffling the cards, one or two have become reversed and I will read them as they come. I will be giving the meaning for both upright and reverse of each card in the lessons. It’s really up to you which way you prefer to do your readings. You might try both ways and see what you feel most comfortable doing.

If you have decided to buy a tarot deck, I suggest you take them out and go through looking at each card. Take some time and see what you feel or get from the pictures, symbols and numbers. If your deck came with a book, you might want to read the descriptions they’ve provided for you, however, I don’t use a book, just my years of experience with the cards. Try getting acquainted with your tarot deck, and I’m anxious to hear what you learn from the cards as well as my lessons.

Next week, we will start on the actual cards meanings beginning with the four (4) aces, one of each suit. Remember to subscribe to my blog for email notifications to remind you to check back each Monday for a new lesson. You can also like my page on Facebook and follow me on Twitter where I will posting as new lesson is done. As always if you have questions about this first lesson, please either post as a comment here or on my Facebook page. You can also send me an email if you choose not to have it posted.

This lesson is now available as a video on my Videos page here on the site or on my  YouTube channel. 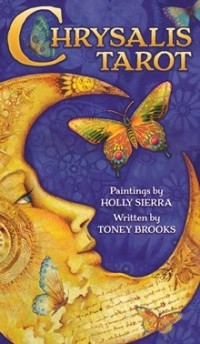 The Chrysalis Tarot is used with grateful permission written by Toney Brooks, paintings by Holly Sierra. The Chrysalis is available for purchase at their Website or through the publisher, U. S. Games Inc.