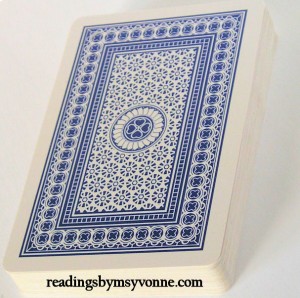 Cartomancy pick a card contest win a reading, what is it? Why are you seeing the back of a playing card? Well, let me explain. Cartomancy is using cards, and in this case regular playing cards, as a divination tool to give a reading. For this contest, pick a card from a regular playing card deck, post your answer in the comments on my Facebook page, like my page now or if you have already, and the first person to guess the card will win a free three card reading. The winner will be chosen on Friday, May 22. I will notify the winner through my Facebook page and we can set up an appointment for your live chat reading or through an email reading.

Sound a little crazy because you thought card readings were done with tarot cards? Many people never realized that playing cards have been used to do readings in many countries dating back many centuries. For that reason, I thought I’d give you a little history lesson.

Playing cards were first introduced in Europe in the 14th century and are one of the oldest of the common forms of fortune telling. Standard playing cards were very popular in the 18th, 19th and 20th centuries. England used a deck of 52 cards much like a regular bridge or poker deck of playing cards. France preferred a deck of 32 piquet deck and they are often still used today.

There are a lot of different claims as to what each suit of the playing cards depict compared to the suits of the current tarot cards.

Because a regular deck of playing cards only has 52 cards and a deck of Tarot normally has 78 cards, you will not be using the Major Arcana with the playing cards. Some people do leave in the Joker and read it as you would read the Fool card in Tarot.

Many people feel regular playing cards were not the origin of the Tarot decks but instead evolved from a deck called “triumph”, originally designed for a game played at special events. Of course there are so many different views and opinions, it’s hard to decide which is really accurate.

I started using regular playing cards to do readings many years ago. For some people, they seem to respond better to the playing cards rather than Tarot cards because of the stigma attached to the Tarot.

Now be sure to like my Facebook page, choose your card and enter the pick a card contest. If I get a good response from this contest, I’ll be running it again every few weeks so be sure to check back to my website and Facebook page so you don’t miss out on winning a free three card reading.

Of course, you can always purchase a chat or email reading through my site or my Facebook page instead of waiting for the contest.